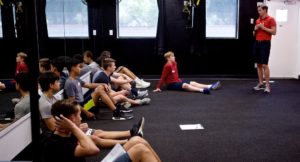 With the Desert Speed School since its founding in 2005, Conor is a certified USA Track & Field Coach, certified trainer with the American Council on Exercise, and Certified Functional Strength Coach with additional certifications in TRX® training and the Functional Movement Screen®. In his time training individuals and teams at the Desert Speed School, he has helped thousands of local athletes reach their goals on the field, court, and track. Certified as a Youth Nutrition Specialist and Precision Nutrition Coach, he also works with athletes to better fuel their bodies for training and competition.

Conor graduated from North Park University in Chicago, Illinois, where he was a 4-year letter winner and 3-year captain of the track and field team. While on the track and field team, Conor was a two-time All-Conference place winner, a two-time Academic All-Conference selection, set two school records as part of relay teams, and was named 2003 Sportsperson of the Year. He also served as an Assistant Coach for his alma mater following his four years competing.

Passionate about helping athletes maximize their athletic potential and develop such critical life skills as confidence, mental strength, and resilience, Conor works with athletes to create a program that enables them to reach their goals – and beyond.

Originally from Phoenix, Darien was an All-State track athlete in high school, finishing 2nd in the 110m hurdles as a senior. MVP for his high school team both his junior and senior years, he holds the school record for the hurdles, and later competed for the University of Arizona. In addition to coaching athletes at the Desert Speed School, Darien is also the Head Track & Field Coach at Catalina Foothills.